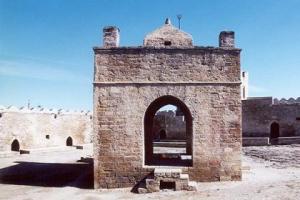 On the carved entrances of cells are stone plaques describing who built them and in which year.

In all there are over 20 stone plaques, of which 18 are in Devanagri, one in Gurumukhi and one in Farsi (Persian),

Sanskrit text on which begins in Hindu tradition with “Om Shri Ganeshaye Namah.”

The temple was built on the spot where subterranean gas leaking out of the rocky ground used to burn day-and-night.

Local records say that it was built by a prominent Hindu traders community living in Baku and its construction coincided with the fall of the dynasty of Shirwanshahs and annexation by Russian Empire following Russo-Iranian war.

Indian Association Azerbaijan ( IAA ) was formed on 5th October 2003. It is a unique venue of interaction for Indians in Azerbaijan, imbibing a sense of unity in diversity . This unity does not cancel out the diversity of countries, regions and people, but it enables us to live together seeing diversity as not a hindrance, but rather as a wealth – by which such interactions become stimulating, varied and vibrant.